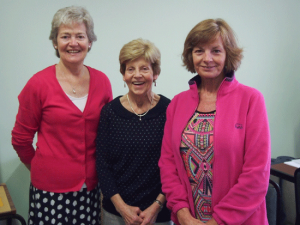 Jo Culhane is a Roman Catholic at St Jude the Apostle Parish, Templeogue where she has lived for thirty-five years. She is a mother of two grown up children. Studying the Catechesis of the Good Shepherd has been a learning experience for her in her growing closer to God. She is a trained catechist for Level I, II and III and has spent five years in training. She holds a Bachelor of Arts Degree in Humanities in Montessori Education and a Masters Degree in Education. While studying for her Masters she chose Montessori’s Religious Education for her thesis. This took her to Rome to meet and interview Sofia Cavalletti. She serves as a Level I, II and III catechist; has written articles on the Catechesis of the Good Shepherd for the St Nicholas Montessori Teacher’s Newsletter; has been a teacher trainer and lecturer in Montessori Education at St Nicholas Montessori College, Dublin and has been a teacher for over thirty-two years. She became a Formation Leader in 2009. Her catechist friends claim that she is dedicated to her work at St Jude’s Parish where she plans the yearly programme for the Atria; her monthly ongoing catechetical training; her attention to detail in material making and her overall love of keeping true to Montessori’s philosophy and Cavalletti’s Catechesis of the Good Shepherd.

Teresa Lambe joined us at St Jude’s Parish in 2007 as a catechist. She is a mother of four grown up children. She is a Roman Catholic and a Montessori teacher with over thirty years experience working with children. She is a Level I catechist and is in training for Level II. She currently teaches children in their preparation for the Sacrament of Confirmation. Her catechist friends claim she is enthusiastic about her love and devotion to catechesis; her enjoyment for material making; her attention to detail and taking care of the Atrium environment.

Frances Crowe is a Roman Catholic. She joined us at St Jude’s Parish in 2007 as a catechist. She holds a Bachelor of Arts Degree in Montessori Education. She is a lecturer and teacher trainer at St Nicholas Montessori College, Dun Laoghaire. She is a mother of five adult children. She is a talented teacher who also specialises in music. She is currently teaching primary level and uses the Catechesis of the Good Shepherd as part of her Curriculum. Frances plans the songs for the Atrium each week. She is a Level I catechist and is in training for Level II.

Eleanor Ryan is a Roman Catholic and mother of two adult children. She is a Montessori teacher with many years experience and is a qualified drama teacher. She was first introduced to the Catechesis of the Good Shepherd in 2000. While in Rome in 2002 she met Sofia Cavalletti and visited her Atria. She currently serves as a Level I and II catechist in the Atrium where she enjoys the experience of listening to God with the children. She also teaches children in their preparation for the Sacraments of Reconciliation and Communion. Her gentle, thoughtful presence makes a meaningful contribution to her Atrium work.

"If we want to help the child draw nearer to God, we should with patience and courage seek to go always closer to the vital nucleus of things. This requires study and prayer. The child will be our teacher if we know how to observe." Sofia Cavalletti

Contact Jo Culhane at joculhane@cgs.ie for information on the Catechesis of the Good Shepherd

In speaking about introducing Prophecies from the Old Testament to the children Sofia has this to say: ‶Our aim is to offer images and expressions that are striking to and readily grasped by the children.” Religious Potential of the Child Sofia Cavalletti
Forestly Theme | Powered by Wordpress