Catechesis of the Good Shepherd Ireland

The Catechesis of the Good Shepherd uses the Montessori Method of Education as a guide. Religious Education through the Montessori Method of Education began in 1910 when a colleague of Montessori’s, Anna Maccheroni was invited by the Abbot of the Benedictine Order to take part in a Liturgical Congress in Montserrat. Maccheroni advised that the teaching of the Liturgy as set out by Bishop Rudolfi of Venice, approved by Pope Pius X in his Decree Quam Singulare 1910, could be presented to children at a much earlier age than the one specified by the Pope. She announced that she was ready to try out the experiment in the Model Montessori School at Barcelona for children 3-6 years. Maccheroni’s suggestion was accepted and so Montessori’s Religious Education began.

A young priest, Father Angelus, was chosen as chaplain because of his simple, pure and devout faith. A Children’s Chapel was prepared and part of a meadow surrounding the Church was cultivated for wheat and grapes. The children dug the furrows, planted the seeds and watered them. Once ripe, tiny scythes were purposefully made and the children were shown how to cut the wheat, bind the sheaves and send them for grinding to await their return as flour. They learned how to make bread for the hosts and operate the machines for cutting the circles. In the same way they gathered the grapes and prepared the wine. The fruit of their labour was brought to the altar in solemn procession for the Offertory. They learned how to understand the Mass.

The older children served Mass while the younger children prepared the gifts and brought them to the altar. The significance of the sacred vestments and each part of the Mass came to be understood by them. Processions were arranged to coincide with special feasts and short retreats were organised for the First Communicants. 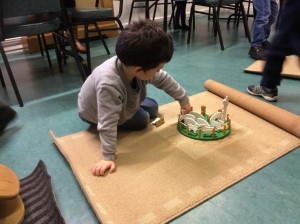 Dr Montessori prepared special wooden models and statuettes whereby a Parable or a Message from the Bible could be presented. She felt that religion should form a spontaneous and integral part of the child’s mental and spiritual life. The joy which the children were capable of once they were helped to draw near to God, became evident to Montessori. The room where this religious instruction took place was called the “Atrium”, based on the name of the place in the early Christian Basilica where the first Christians received their formation in the faith.

Pope Benedict XV (1914-1922) who was personally acquainted with Dr Montessori held her religious values in such high esteem that he requested her to develop a religious syllabus for Catholic Schools in 1916, but, sadly, he died before this project was completed. Montessori’s Religious Education continued in Barcelona until the Civil War broke out and she was forced to leave Spain because of her Catholic values.

In 1954 Sofia Cavalletti, an Italian, a Hebrew Scholar, became a true advocate of Montessori’s Religious Education. She holds a Doctorate in Hebrew and comparative Semitic languages. She sat on the Vatican Commission for Jewish/Christian Dialogue and in that capacity worked with the Vatican when these meetings took place. She is a writer on post-biblical Hebraic tradition and ecumenical matters, an educator, a lecturer and a catechist in a University setting. Her first writings on Montessori’s approach to Religious Education began in 1964 Teaching Doctrine and Liturgy and later she wrote The Religious Potential of the Child (1979). She now has several books to her credit.

Cavalletti found a colleague in Gianna Gobbi, an Italian, and a devout Catholic who was a protégé of Dr Montessori. Gobbi was invited to assist Montessori in her teacher training courses and in turn Montessori was to effect the direction of her life. Together Cavalletti and Gobbi became the pillars underpinning Montessori’s approach to Religious Education. When Cavalletti and Gobbi’s paths came together they were to see for themselves that children have a special capacity to experience and enjoy the presence of God. Unfamilar with working with children Cavalletti was invited by a friend to instruct her son in preparation for his First Communion. At that time the Catechism was the method used in the preparation for the Sacraments. Cavalletti however began with the Bible, the first page of Genesis, in the presence of a lighted candle. She was deeply moved by the way the boy engaged with the subject. Each phrase was pondered over and wondered about with reference to the Bible content. Later six others joined. It was shortly after this experience that Cavalletti was introduced to Gobbi through a mutual friend who was to send them their first group of children for a Catechesis Education. In the beginning children simply listened to a lesson from the Bible and made some drawings. It was during one of those lessons that Gobbi presented a model of an Altar, the sacred vessels of the Mass and the priest’s vestments, ideas which no doubt she had taken from Montessori’s Religious Education. The enthusiasm of the children was so overwhelming that it made them think deeper about the account of their lessons thus developing a unique methodology. 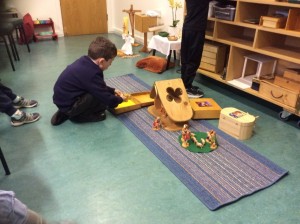 Drawing on Montessori’s experiments in Barcelona, they arranged an Atrium in 1954. Benefitting from Montessori’s deep insight, knowing that if the child was to be helped to approach and experience the presence of God, Cavalletti and Gobbi felt the message had to be materialised in some concrete way. Using the children’s senses, as Montessori did and offering them opportunities for movement, furnishings low in size were prepared and a series of religious materials were developed gradually which served as tangible instruments for the child’s encounter with God. Cavalletti and Gobbi were so impressed with the children’s enthusiasm and joy that they started to make materials to put before the children. They began a catechesis which was to grow and later to be renamed the Catechesis of the Good Shepherd. Sadly Sofi Cavalletti went to her eternal home on the 23rd of August 2011 just 2 days after her 94th birthday.